Hot topics in the Fall housing market: foreclosures, millennials, and the election.

As we near the end of the year, the mortgage forbearance expiry date sparks questions of what will happen with payments and foreclosures next year; especially for those who may remain unemployed. Thankfully, foreclosures and short sales numbers have been much lower than expected, at less than 1 percent in August. Experts say any delinquencies won’t have much impact until 8 to 12 months later.

Millennials remain the largest buying pool in the housing market. They have accounted for more than half of closed purchase home loans, at 53 percent, and were the fuel market sales. First-time buyers accounted for 34% of sales in July, up from 32% a year earlier, and the majority of them being in the millennial age rate.

With the election a couple of weeks away, buying activity is expected to slow. Experts say this is normal behavior and the year after an election tends to be at its strongest.

If you're wondering "Can you use a mortgage to pay off credit cards?" Or "Can I roll credit card debt into a new mortgage" or want to learn more about rolling debt into mortgage, contact me to learn more about consolidation debt refinance.
Recommended Posts
Alameda Mortgage Corp (formerly Caliber Home Loans)
Connect
Request FREE Advice!
© 2019 Alameda Mortgage Corporation, NMLS #271603. Licensed by the Department of Business Oversight under the California Residential Mortgage Lending Act; the Department of Real Estate, license #00490525.
Contact Us 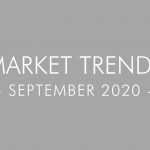